On a night when Roy Keane reminisced about the epic rivalry that once existed between these two sides in the Monday Night Football studio, Manchester United and Arsenal served up a reminder of how far their standards have slipped.

There were flashes of inspiration for the goals, but the quality of the encounter bore stark contrast to the classics of the past.

Almost half an hour had passed before either side even managed a shot. The game did open up after that, but it was littered with basic errors and wasted opportunities.

There were plenty of moments to sum it all up. In the first half, there was the set-piece routine which involved Granit Xhaka scooping a free-kick to Calum Chambers, who then sent his cross straight out of play.

In the second minute of stoppage time, there was the cross-field pass from Victor Lindelof which sailed high into the stands.

It lacked quality at times, conceded Gary Neville in the Sky Sports commentary box. Keane, his former team-mate, went further. It was shocking, he said. United lacked the belief to finish the game off - the game was there for the taking for them. I`m not sure what can Ole will take from it. There`s not too many positives.

The draw leaves United 10th in the table with their lowest points total of the Premier League era after seven games. Ole Gunnar Solskjaer`s side have only scored more than once in one of their last 15 games in all competitions. Marcus Rashford returned from injury, but they were reliant on a moment of magic from Scott McTominay for their only goal.

The result suits Arsenal better, the point sending them into the top-four on goal difference, but their defensive performance was once again unconvincing and Unai Emery`s starting line-up - he opted for Matteo Guendouzi, Granit Xhaka and Lucas Torreira in midfield - felt unadventurous for fans who craved a first win at Old Trafford since 2006.

I think it was a game where both teams were going into it thinking the other team were there for the taking, said Sky Sports pundit Jamie Carragher afterwards. We know Arsenal`s record is poor at Old Trafford. If they were ever going to beat Manchester United, it was tonight.

The one team looking at that tonight who will be buoyed is Chelsea. At the start of the season, I thought Chelsea might struggle to get into the top four. I think it will still be a fight, but when you watch them play, they have more quality than both these sides.

The only real bright spots were provided by two academy products. For United, there was another encouraging performance from McTominay. His goal, his first at Old Trafford, came with the help of a slight deflection, and while he should have won it with his late header from Ashley Young`s corner, his overall display showed he is growing in stature.

I remember saying a year or so ago that he would have to settle in at centre-back, said Neville. I didn`t think he had the subtlety to play in central midfield, but he`s improving enormously, game on game, and he`s confident. There`s a lot about him to like in terms of his character and personality. You can see that he does have something about him.

As well as scoring the goal, McTominay broke up Arsenal attacks effectively, making more tackles and interceptions combined than anyone else on the pitch and winning more duels than any of his team-mates.

For Arsenal, meanwhile, there was an eye-catching display from Bukayo Saka. The youngster only turned 18 a few weeks ago and this was only the fourth senior start of his career, but he comfortably outshone Nicolas Pepe, the club-record signing on the opposite flank, showing a willingness to run at United`s defenders and providing a smart assist for Pierre-Emerick Aubameyang`s equaliser.

I thought he did really well, said Carragher while analysing Saka`s role in the goal, latching onto Axel Tuanzebe`s loose pass. What I love about what he does is that he reads and smells the danger. He thinks something could happen, and he`s already making up ground to go and press Lindelof, and then he produces the weight of pass into Aubameyang.

To come in at 18, away at Old Trafford, in an Arsenal team that aren`t playing great - he was backing into Ashley Young, he was holding the ball, he was strong, he was confident - he can be really proud of his performance tonight.

The future looks bright for Saka and McTominay, but for Solskjaer and Emery there is plenty of work ahead. The days when Manchester United and Arsenal tussled for titles feel like a very long time ago now.

Previous
Auba leveller at Man Utd: 'VAR at its best' 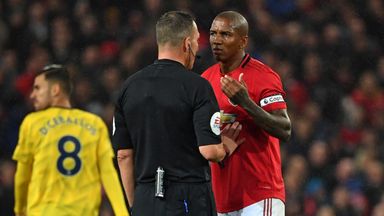 Auba leveller at Man Utd: 'VAR at its best'