A 2-0 defeat by Wolves prior to the international break leaves the reigning champions eight points adrift of Jurgen Klopp’s side.

Liverpool have won all eight of their top-flight outings so far this campaign, although they did let a seven-point advantage slip in finishing second to City in 2018/19.

However, Guardiola believes last term’s turnaround will have no bearing on this season’s title race.

“I don’t believe in that kind of thing, every season is different,” he told reporters. “In sport the only way to do well is to stay in the present.

“I am not setting any points targets or objectives at this stage. In April and May you can do that but what we are facing is an opponent who are unstoppable right now. Liverpool are champions of Europe and haven’t lost once in eight games.

“We will just have to try and do what we can, we have 50 games left in all competitions. I am not concerned about being the guy who thinks he’s going to win every Premier League for the rest of his life.

“Of course I still want to win, and I still believe we are contenders, but there is a long way to go and all sorts of dynamics, momentums and injuries still to happen.

“If we don’t win I will say congratulations to the team that does. What Liverpool are doing is fantastic but Chelsea and Arsenal are also getting better. The level is rising all the time.”

City will be looking to close the gap with Liverpool when they face Crystal Palace on Saturday, before the Reds’ trip to Old Trafford to face Manchester United the following day.

7 Premier League greats who bounced back from a bad start

Gerrard warns Rangers that under-performing Hearts have turned the corner 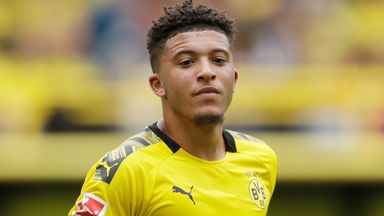 Sancho dropped and fined by Dortmund
Back to news list