UEFA`s Control, Ethics and Disciplinary Body will meet on Monday, with the racist abuse suffered by England players in Bulgaria earlier this month sure to be near the top of its agenda.

The Bulgarian Football Union faces multiple charges after the scenes in Sofia on October 14 - described in an FA statement as abhorrent - which almost saw an international team walk off the pitch, and not return, for the first time.

England were eventual 6-0 winners but, sadly, it was not their free-flowing football which made 99 per cent of the headlines...

England`s black players were abused almost from kick-off with Tyrone Mings and Marcus Rashford appearing to be the main victims early in the game.

Sky Sports News reporter Rob Dorsett heard `clear monkey chants` on at least six occasions in the first half which came from individual pockets of supporters - all inside a 10 minute period.

The game was stopped briefly for a PA announcement to be made but, after the abuse continued, England boss Gareth Southgate spoke to the fourth official and a second longer break in play occurred just before half-time.

Bulgaria captain Ivelin Popov, who also criticised fans after the game, spoke with them during the interval and, despite the possibility of England players not returning for the second half, it took place without further stoppage and the visitors secured a 6-0 victory.

Although there were further incidents of racism from the stands in the second half, they were either not heard by England`s players, or not reported by them to the officials, meaning stage two of the UEFA protocols - which would have seen players leave the field for 10 minutes - was never reached.

It was explained to Sky Sports News that a group of neo-Nazis/Ultras on the other side of the stadium - they were filmed leaving at half-time - were pre-planned and coordinated to try and cause maximum embarrassment to the Bulgarian Football Union, whose running of the national game has been criticised domestically.

The host nation faced criticism after the game, with their supporter behaviour being widely vilified around the world, and not just inside football circles. Bulgarian Football Union president Borislav Mihaylov resigned, as did manager Krasimir Balakov who also faced criticism for his claims in the post-match press conference that he had not heard any of the abuse - he would later apologise in an emotive Facebook post.

The inevitable UEFA charges followed - for racist abuse, throwing of objects, disruption of the England national anthem and playing replays on the stadium`s giant screen. England`s FA was also charged for disrupting the Bulgaria anthem and for having an insufficient number of travelling stewards.

A total of 16 arrests, at last count, have been made in respect to the sad incidents on that Monday evening in Bulgaria`s capital city, although sanctions against any individuals are yet to be revealed.

England manager Gareth Southgate: I`m incredibly proud of the players and all the staff. Of course, we could be criticised for not going far enough. But I think we have made a huge statement and, frankly, we were in an impossible situation to get it right for the satisfaction of everyone.

Sky Sports News reporter Kaveh Solhekol: It seemed, especially in the first half, that when any black England players got the ball they were subjected to abuse, racist abuse, monkey chants, Nazi salutes - the worst racism I`ve ever seen at a game.

England midfielder Jordan Henderson: I felt angry. They`re my team-mates, they`re my friends who I`ve known for a long time and shared a dressing room with. It`s shocking to see. But the game goes on and you have to switch the focus to the football. I thought we did that brilliantly.

Chief Superintendent of the UK Police Football Unit Steve Graham said the racist abuse suffered by England`s players was quite simply the worst racist behaviour he had ever seen.

Perhaps most pertinently - UEFA president Aleksander Ceferin: Believe me, UEFA is committed to doing everything it can to eliminate this disease from football. We cannot afford to be content with this. We must always strive to strengthen our resolve. The rise of nationalism across the continent has fuelled some unacceptable behaviour and some have taken it upon themselves to think that a football crowd is the right place to give voice to their appalling views.

The game against England was already being played in a partially-closed Vasil Levski National Stadium after UEFA imposed sanctions following incidents around Bulgaria`s previous qualifiers against Kosovo and the Czech Republic.

Bulgaria`s football federation had been forced to leave 5,000 seats empty, although the ground was barely half full anyway, and they will also have to leave 3,000 empty for the visit of the Czech Republic next month…but more of that to come.

The country`s federation was also fined 40,000 euros in 2011 when England`s Ashley Young and Theo Walcott faced racist abuse during a qualifier for Euro 2012.

Disciplinary cases are not just limited to the national side, with Levski Sofia having been fined and forced to play in front of a partially closed stadium for racist abuse - in the form of a banner - during a Europa League qualifier against MFK Ruzomberok of Slovakia earlier this season.

Lokomotiv Plovdiv were similarly punished in August after abuse aimed at one of Strasbourg`s players in another Europa League game.

What punishment could we expect?

Until now UEFA`s reaction to incidents of racist abuse has been limited to the first half of their 18 point list of disciplinary measures - warnings, reprimands, fines (which can be up to a million euros), playing matches behind closed doors, full or partial stadium closures and playing a match in a third country.

But there have been widespread calls since the events of October 14 for UEFA to use the tougher penalties their regulations also include.

Two of those are points deduction, although in this case that would do little to harm a Bulgaria side already long since out of the running for a place in Euro 2020 through their qualifying group.

However, Bulgaria do remain in contention to qualify for the competition through the complicated play-off system and there have been calls on UEFA to use their powers under Article 6.1 (o) to disqualify them from the competition or exclude them from future competition.

Whether the eventual response will be as strong as that we might find out soon, although Sky Sports News has been told a final decision might not be made public on Monday.

Solskjaer delighted to have Martial back in Manchester United fold Jansson out to right wrongs with Brentford 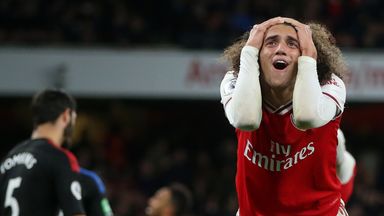 So why was Arsenal's winning goal ruled out?
Back to news list