Ralph Hasenhuttl is convinced he retains the backing of Southampton`s board and has been touched by messages of support from fellow managers in the wake of the 9-0 drubbing by Leicester.

Saints manager Hasenhuttl admits his side are already embroiled in a Premier League relegation fight, following the heaviest defeat in the club`s 134-year history.

The Austrian was quick to accept full responsibility for last Friday`s loss, before being pleasantly surprised to subsequently receive kind words from some of his peers.

Asked if he feels the Southampton`s hierarchy are still behind him, the 52-year-old replied: Absolutely, yes.

We speak always. Everybody here, they are good in communication - better sometimes than in playing football.

Everybody sees what situation we are in and how much we do every day to fight back on the positive track.

But no doubt we all know about the critical situation at the moment.

We know that it is a season where it`s again about being relegated or not. This shows from the first 10 rounds [of matches].

Hasenhuttl expressed gratitude and appeared genuinely moved while revealing he had been contacted by other coaches.

Ahead of Saturday`s trip to Manchester City, he said: I must say that it is something new for me that other managers write me messages at that moment and it`s something that is maybe normal in the Premier League but I haven`t seen this before in Germany or in Austria.

This shows me how big gentlemen they are and I think it helps everybody, positive messages from very successful managers.

That was very surprising for me and I appreciate that very much, thank you for that. Everybody`s help is something that builds you up and this is a nice experience for me.

Southampton set numerous unwelcome records during the thrashing by Brendan Rodgers` team, including the highest home defeat in top-flight history, as well as equalling the biggest loss of the Premier League era.

Hasenhuttl was aware before the rout that he needs to recruit reinforcements during the January transfer window.

You wouldn`t need the 9-0 to know that in positions we need new players. It mustn`t be this result that shows me we have to do so, he said.

It would be nice if we have more options in the winter transfer window but it is not the moment to think about this.

We have to trust the players that are here and the players we are working with and that they can do it better. They know it and I know it and let us come to work together. 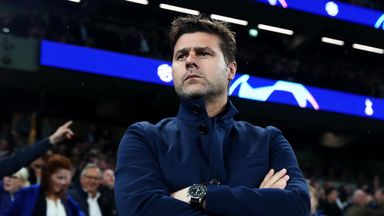