Unai Emery's Arsenal are in decline with no sign of progress

Faith in Unai Emery is fading fast but he doesn`t help himself. Arsenal were leading Wolves late in the game at the Emirates Stadium when he replaced Lucas Torreira with the more attack-minded Bukayo Saka. Within three minutes, Wolves had equalised. Another lead lost and another two points dropped. The pressure is building.

Arsenal supporters have taken a hammering over the past week as the fall-out from Granit Xhaka`s substitution against Crystal Palace rumbled on, but they are entitled to feel frustrated with this decision. The coach`s call opened the game up and his team paid the price. Despite his insistence that the tactics were correct, Emery continues to confuse.

Is he helping Arsenal or is he hindering?

Some of the stats are damning.

Of course, that is what is so awkward for Emery right now. Perhaps more than anything else, this was the issue that he had been recruited to address. The influence of a man with a reputation for tactical awareness was supposed to be swift given the tales of Arsene Wenger`s apparent unwillingness to focus too much on the opposition`s strengths.

Arsenal`s struggles under Emery are often compared to the decline of Manchester United since Sir Alex Ferguson`s retirement but the circumstances were different. Ferguson left United on top. The only way was down. Wenger was dispensed with because there was genuine hope and expectation that the club could kick on under another coach.

Instead, Arsenal are defending worse than ever before.

Surprisingly, even at the start of this decade, long after the title wins under Wenger had come to an end, Arsenal consistently conceded fewer shots than any other team. There was a decline - they ranked sixth for fewest shots faced in four of his final five seasons in charge, but never worse than that. Never anything like what is happening now under Emery.

Ten teams faced fewer shots than Arsenal in the Spaniard`s first year in charge. So far this season, only Aston Villa and Norwich have allowed their opponents more efforts on goal.

Arsenal are now alarmingly easy to play against.

That was all too evident on Saturday when Wolves, a team happier playing on the counter-attack, seemed surprised by how much they were encouraged to advance right from the outset. Almost reluctantly, they accepted the invitation and Nuno Espirito Santo was entitled to claim afterwards that by the end of the match they looked the more likely winner.

Arsenal are not a team equipped to sit in and defend - certainly not without Torreira. It was Dani Ceballos who allowed Joao Moutinho to run into the space behind him from the throw-in from which Wolves scored but should he even have been marking him? A midfield of Ceballos, Saka, Matteo Guendouzi and Mesut Ozil is hardly designed to protect.

But what is this Arsenal team designed to do now?

They are certainly not a pressing team. Manchester City top the stats for high turnovers - possession sequences that start within 40 metres of the opposition goal. Arsenal are bottom half. Liverpool top the stats for pressed sequences - where the opponent has three or fewer passes within 40 metres of their goal before losing it. Again, Arsenal are bottom half.

Perhaps as a result of this inability to win the ball back quickly or sustain attacks high up the field, Arsenal aren`t a passing team either under Emery.

They are playing fewer passes than at any time in the past decade.

This feels important because, according to Opta`s advanced metrics, it is now a key point of difference between them and the teams that are above them in the Premier League table.

In terms of sequences of ten passes or more, Arsenal are way behind the current top four in the Premier League, who also happen to have had more of these sequences than the rest. It is not a coincidence. While there are many different styles of play, ball domination is a common trait among the best teams and Arsenal appear to have given it up.

Emery`s team have played fewer passes than Brighton this season and in terms of these lengthy pass sequences they are closer to them and Norwich than the teams they are looking to overhaul. It is a bitter irony for supporters given that Emery has replaced the man who did more than anyone else to introduce this style of football to the English game.

Emery was brought in to change things - but not like this.

If Arsenal are anything now they are a counter-attacking team. They top the Premier League for fast breaks and no team has had more direct attacks - open-play sequences that start inside their own half, progress quickly to the opposition goal and culminate in a shot or a touch in the opposition box. This is Arsenal now but it is not working for them.

The key was to have more clear chances, said Emery in his press conference after the game. He was right. Pierre-Emerick Aubameyang`s goal was the only clear opening that Arsenal fashioned on Saturday and even that finish was more difficult than it looked given that the ball`s path was slightly diverted by Leander Dendoncker`s outstretched leg.

Aubameyang can be relied upon to take such chances - 50 goals in 78 appearances reveals that much - but Arsenal are not creating enough of them. The team did not manage a shot on target during the final hour of the game against Wolves, making something of a mockery of Emery`s suggestion that his team deserved more.

It is a trend. Arsenal are creating fewer big chances than at any point in the past decade. Far from being unfortunate, the underlying numbers suggest that the reality of the club`s current plight might be worse than the table suggests. Arsenal`s net expected goals total is negative.

Put simply, the chances they offer up are better than the ones they have.

That is not sustainable but is it solvable?

For all the flaws in this squad, what`s adding to the pressure on Emery is the sense that it is. This is not just about the isolated decisions like the substitution on Saturday. This is about the overarching feeling at Arsenal that there is plenty there for him to work with.

The chemistry between Aubameyang and Alexandre Lacazette is a weapon that`s the envy of many Premier League managers. Gabriel Martinelli has huge promise. As does Nicolas Pepe. Another coach might have done much more to get the best from Ozil too. Give those attacking options a proper platform from which to play and Arsenal really should excite.

Guendouzi and Torreira are popular young midfielders, while the full-backs Hector Bellerin and Kieran Tierney are fit again. That leaves the centre-backs and the perennial lack of a genuine holding midfielder. Problems, no doubt. But with defensive organisation seen as easier to coach than attacking cohesion, it should not be beyond Emery.

Unfortunately, the demand for more time to find a way to correct these failings only makes sense if progress - however glacial - is actually being made. The problem for Emery is that the statistics tell a different story, one that feels all too familiar for the Arsenal supporters. This is a team that is still getting worse. And Emery does not appear to be helping. 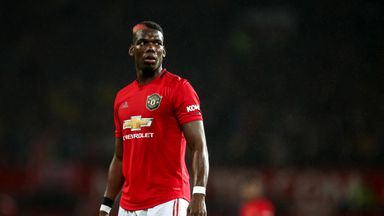