From Celtic`s Italian Job to a dominant Manchester United attacking showing, we pick out the key stories from this week`s Europa League...

There was a danger Manchester United would fail to convert their early dominance into goals against Partizan Belgrade as chance after chance fell by the wayside in a frenetic start at Old Trafford, but that was until Mason Greenwood provided a timely reminder of the talent at his disposal.

The 18-year-old showed composure of the highest order as he effortlessly dispatched a difficult chance to put United in front after 22 minutes, and 11 minutes later he became the youngest player to score and assist in a European game for United when his relentless pressure laid on the second for Anthony Martial.

A lot has been made of Greenwood and his undoubted potential, arguably too much attention for a youngster who is very much still learning his trade, but when he continues to display such assuredness in front of goal, the hype is here to stay.

There is just something about Celtic, European nights, and Neil Lennon. It`s a recipe that generates historic moments and results. Almost exactly seven years on from a Lennon-led Celtic stunning Barcelona in the Champions League, the Hoops boss was at it again, this time in Rome as he oversaw a momentous 2-1 win that guaranteed Celtic`s place in the last 32. His thoughtful style certainly seems to suit the tactical battle in European heavyweight clashes.

After beating Lazio 2-1 at Celtic Park, you`d have assumed Lennon would have continued with the same formation in the reverse fixture but his decision to match up the Serie A giants in a 3-5-1-1 worked a charm on the road.

Ciro Immobile handed the hosts a deserving lead but Lennon`s side grew into the game and came charging back, with James Forrest and Olivier Ntcham sending the 9,000 travelling Celtic fans delirious. The party in Rome may go on for days.

Arsenal may have picked up a point which inches them closer to a place in the Europa League`s last-32, but in truth, it was another woeful performance from Unai Emery`s side.

They lacked direction and creativity once again, scoring with their only shot on target during the whole 90 minutes, while their defensive frailties were laid bare by Vitoria on numerous occasions in Portugal. Had the Portuguese side been more clinical in the final third, then the Gunners could have been facing up to a heavy defeat.

The Gunners have now drawn their last four games in a row in all competitions, despite having a lead in each of these matches.

The performance in Portugal would`ve done nothing to ease the pressure building on Emery and with a crucial Premier League clash against Leicester at the King Power Stadium now in vision, the Spanish coach has plenty of work to do as he attempts to get his side`s season back on track.

Ahead of the game at Leicester, which is live on Sky Sports on Saturday evening, it feels like we have reached a crossroads in Emery`s tenure at the Emirates Stadium. Victory away to the Champions League-chasing Foxes could be the catalyst Arsenal need to kick-start their season, but defeat could leave the Gunners nine points adrift of fourth place and Emery`s position hanging by a thread.

Rangers roll back the years

A famous European night under the lights at Ibrox. Rangers are getting used to this feeling again. 11 years since they reached the final of this competition, they`ve been through the mill and back - but having beaten Feyenoord here last time out, they followed it up against an even grander foe.

It felt like Rangers needed to believe themselves that they belonged on this stage at first, and they took their time to exert themselves on Porto. But once they got a bit of a half-time rocket from Steven Gerrard, they stepped up a level and two goals in four minutes had Ibrox bouncing. We haven`t seen it rocking like that in some while.

Gerrard heaped the praise on goalscorer Alfredo Morelos after the game, in which the Colombian scored one and set up the other in their 2-0 win. I`ll never get bored of talking about him, I can`t describe how much I enjoy working with him, Gerrard told reporters.

On games like tonight, that`s no huge surprise - but how many more will they be working together if he keeps it up?

As we entered 12 minutes of stoppage time at Molineux - given after a horrific-looking head injury to Slovan defender Kenan Bajric - Wolves fans must have been wondering whether their side could produce another late show.

Nuno Espirito Santo`s men have become accustomed to leaving it late in recent weeks, with each of Wolves` last 11 goals in all competitions having come in the second half of games.

And it was no different against Bratislava - Jimenez powered home a late header, as Wolves won three consecutive games in major European competition for the first time since winning their opening six in the 1971-72 UEFA Cup campaign. That season saw them reach the final of the competition.

Previous
Pellegrini not concerned for his job 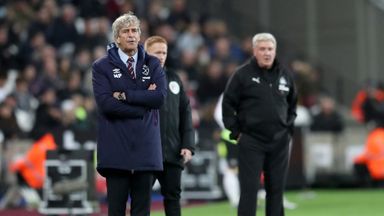