Steve Bruce: Newcastle are on the right track

Steve Bruce believes his Newcastle side are on the right track as they aim to claim back-to-back wins with victory at home to Bournemouth.

The Magpies recorded an impressive 3-2 win at West Ham last weekend to open up a four-point cushion over the relegation zone with 12 points from 11 games.

That total is already double the amount the side achieved at the same stage last season, with seven points coming from the last four after a humbling 5-0 defeat away to Leicester at the end of September.

The last few weeks have proved they have knuckled down and improved, Bruce said.

We`ve only showed signs and the one thing we`ve got to do now is keep it going.

Back to back wins in the Premier League is huge so if we can we go and do it in front of our own supporters after away at West Ham would be nice.

Everybody wants to go and applaud the away supporters because we can`t take them for granted and West Ham was a good day but now we move on.

I think supporters can see the direction we are trying to go into and pleasantly pleased with what they have seen, particularly last week.

Bruce refused to take any plaudits for his role in Newcastle`s upturn in fortunes but was at pains to reinforce the importance of getting a result against Bournemouth going to the international break.

The most important thing for me is if we can go into the international break with 15 points then it would be a decent return, Bruce added.

We`d all be delighted with that considering I didn`t come in until the end of the summer and it`s new players, new system, new team.

It all takes time but we`re edging towards it and it`s important to back West Ham up before the big December pile-up. That would be a great return and decent platform.

Newcastle go into Saturday`s game against Bournemouth at St James` Park still without Matt Ritchie and Fabian Schar while the game has also come too early for Florian Lejeune despite the player returning to training. 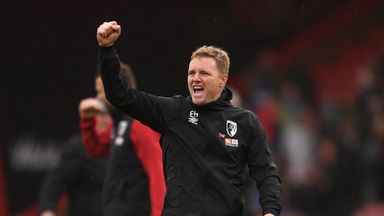 Howe buoyed by 'steely' Bournemouth
Back to news list