Eddie Howe has praised the steeliness Bournemouth have demonstrated in recent weeks but urged his side must push on from their win against Manchester United last weekend.

Bournemouth ended United`s three-game winning run with a 1-0 victory in the Premier League at the Vitality Stadium to record their first win since September and sit seventh in the table.

The Cherries have kept clean sheets in their last three matches and Howe, whose side can set a club record fourth in the Premier League at Newcastle on Saturday, is determined to maintain the momentum going into the final international break of the year.

Last week was great and we were really pleased with the performance and a lot of aspects of our play, Howe said.

But the most important thing for us now is to try and push on from that performance and try to hit or get close to that level every week.

I will just be saying to our team out of possession to continue their good work.

To have the same mentality we have shown in recent weeks because I have been really pleased with that side of our game.

We have had a steeliness in the last few games that has made a big difference and we want that to be part of our DNA.

Steve Cook, who was made stand-in captain following a serious knee injury sustained by Simon Francis late last year, missed out on joining Callum Wilson in Gareth Southgate`s England squad this week but Howe is confident the defender can earn a call-up in time.

He is performing really well for the team and has really played his part in that defensive steel, Howe said.

I see him every day so I know the quality of his performances. I know how good he can be.

Steve can have no worries on that side. He has just got to produce the performances to get picked.

Bournemouth could end the weekend in fifth place with a win at St James` Park, where they have won on two of their last three visits, but Howe is expecting a tough assignment.

Steve Bruce`s side boast the equal-best home defensive record in the league alongside Leicester and Howe - the longest-serving Premier League boss - is wary of the danger the Magpies possess.

They have got a lot of pace in their front line, he said.

Some outstanding individual players so we are going to have to deal with that, while taking the confidence of the United win on our side and try to make sure that shows in our game as well. 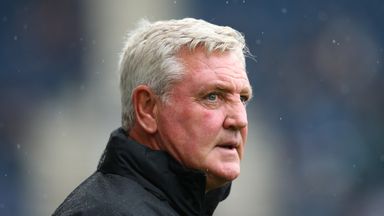 Win over Lazio was ‘unreal’, says Celtic winger Forrest
Back to news list