Premier League hits and misses: Is time running out for Unai Emery?

Can Emery turn around Arsenal`s fortunes?

Leicester City piled the pressure on Unai Emery and Arsenal as Jamie Vardy and James Maddison scored to condemn the Gunners, who are sixth after just one win in their last six Premier League matches, to a 2-0 defeat.

The defeat at the King Power Stadium was another galling 90 minutes for the Gunners and they now sit eight points off the top four with Emery`s remit to take the club back to the Champions League now looking further away than ever since his appointment last May.

Two wins from 10 in the league has seen the pressure mount on Emery`s position with Emery Out once again trending on Twitter in the immediate aftermath of the game. Reports suggest Emery`s job is safe for now, but is he really the right man to turn around the club`s fortunes after the international break?

Emery, who has called for calm, insists he can still take Arsenal forward despite the poor run of form. For me, as a coach, it`s about continuing stronger and improving with our players, he said. I am speaking with the club to stay calm and to stay patient to improve and recover some confidence with some circumstances.

We are receiving criticism, but I know that`s my job. I`ve had lots of moments like that, but I`ve recovered by working to get confidence. We need to stay calm and also keep improving things.

There are no real signs of improvement though. The Gunners have earned 87 points from their 50 Premier League games under Emery (W25 D12 L13) - one fewer than they won in their final 50 under Arsene Wenger (W27 D7 L16).

Their record of 17 points and -1 goal difference is their worst start to a top-flight season after 12 games since 1982-83. They also had just one shot on target for the second successive match, unacceptable for a squad with attacking talents of Pierre-Emerick Aubameyang, Alexandre Lacazette, Mesut Ozil and Nicolas Pepe.

If the Spaniard is given the dreaded vote of confidence to turn things around at the Emirates, there needs to be considerable improvements - and fast.
Oli Yew

Football waits for no one. Mauricio Pochettino is trying to refresh his Tottenham team, to find a way towards success in the next chapter he has repeatedly referred to. But wantaway players, injuries to new recruits and the relentless, testing nature of the Premier League and Champions League continues to stall that evolution.

Meanwhile, Spurs` rivals are marching away from them. This uninspiring draw against a Sheffield United team which caught Spurs cold with their intensity and then, after cancelling out Heung-Min Son`s opener, had Pochettino flicking through formations in search of a response in the second half, has left Tottenham way down the pack.

Adrift in 14th, with fewer points than Steve Bruce`s much-maligned Newcastle, Tottenham are already 11 points off the top four. It`s a long way back and the reality is that, even at this stage of the season, Champions League football next season is looking less likely by the week. Pochettino has spoken about solving problems in January. That could come too late.

It`s five Premier League games without a win now. In fact, Spurs have only beaten Aston Villa, Crystal Palace and Southampton in the top flight this term. That`s a wretched return for Champions League finalists. More worryingly, they are no longer playing the Pochettino way; passive out of possession, careless in possession and unable to feed Harry Kane.

With Christian Eriksen dropped to the bench alongside Toby Alderweireld, and Danny Rose excluded from the squad entirely against Sheffield United, it is clear Pochettino is looking to shift to the future. But the balance, the blend and the quality of the alternatives just isn`t there right now. In this demanding world of football, patience is at a premium and Pochettino needs some relief to ease the pressure on the rebuild.
Peter Smith

The penalty incident that preceded Liverpool`s opening goal was the major talking point at Anfield, but while Manchester City can count themselves unfortunate that Trent Alexander-Arnold`s handball was not penalised, there can be no hiding from the issues which continue to undermine them at the other end of the pitch.

Their back four, comprised of Kyle Walker, John Stones, Fernandinho and Angelino, was brutally exposed by Liverpool. Their panic was apparent from the outset and it was summed up by the moment late in the game when Stones collected a goal kick straight from stand-in goalkeeper Claudio Bravo and launched an inexplicably poor crossfield pass directly into the Anfield stands.

City have been without Aymeric Laporte since September and they are plainly no closer to finding a solution to his absence. At this stage of last season, they had conceded five goals. The defeat to Liverpool means their total this time around already stands at 13. Their defensive struggles are already threatening to wreck their season.
Nick Wright

Richarlison is every bit the talisman for Silva and Everton

Richarlison had gone eight Premier League games without a goal, coinciding with Everton`s slide down the Premier League table since his double in a 3-2 win over Wolves at the start of September.

Saturday`s game with Southampton was on a knife-edge heading into the final 15 minutes, but the Brazilian showed his mental strength and importance to his team in firing home the winner to secure a pivotal 2-1 victory.

The 22-year-old produced an all-round display at St Mary`s, with more touches in the opposition box (8) and more shots on target (2) than his team-mates while also ranking second for the number of times he regained possession (10).

We made a big effort as a club to sign him and the fans here love him, enthused Everton boss Marco Silva. I am here to protect my players until the end and Richarlison is not a diver. He`s a big, big talent.

During his time in England, Richarlison has only scored twice in 25 league games against the traditional top six, and so earning a reputation for delivering on the biggest stage must be the next challenge.
Ben Grounds

Wolves learning how to juggle

Not in the circus sense of course, but Wolves are starting to learn how to juggle the demands of a domestic season in England along with the Europa League. They have already played a whopping 24 games this season, but they are beginning to beat the grind.

Their 2-1 win in the West Midlands derby against Aston Villa was their seventh unbeaten game in the Premier League and halted a run of three successive draws. They have never gone eight games unbeaten in England`s top flight, last racking up seven in a row between March and April 1974, and could make history if they win or draw against Bournemouth after the international break.

While Aston Villa were dealt some real blows injury-wise, Wolves did not really look like letting them through at Molineux and it only took a bizarre goal-line technology-aided decision that saw Villa score a late consolation. They should arguably have won by more too, hitting the bar twice and Raul Jimenez, in particular, wasting three good chances.

Wolves will head into the two-week break inside the Premier League`s top half - currently in eighth with 16 points, level with Manchester United and Bournemouth - and are on the verge of qualifying for the Europa League round of 32.

Wolves waited until September 28 for a Premier League win following their busy pre-season schedule and have only lost once since - ironically, a 2-1 defeat to Aston Villa in the Carabao Cup - but Nuno Espirito Santo looks to have got his team in order to truly compete in the Premier League and beyond.
Charlotte Marsh

It just was not Aston Villa`s day at Molineux and the signs were there ahead of kick-off. Jack Grealish was not fit enough to make the squad, having picked up a calf injury against Wolves in the Carabao Cup, while ever-presents Tom Heaton (calf) and Bjorn Engels (hip) were surprising injury omissions.

The injuries just kept piling up for Villa too. It was a sorry sight to see Jed Steer go down with another Achilles injury just seven minutes into his first Premier League start this term. Having performed magnificently for Aston Villa in the second half of last season, this was his chance to show what he could do in Heaton`s absence, but it was cut agonisingly short.

Take nothing away from Orjan Nyland, he did well as Steer`s replacement, but there was a huge smack of bad luck for Villa to have lost their first and second-choice goalkeepers for a derby game.

Then there was Matt Targett, who may have been grateful for the substitution having really struggled in the first half. He could not keep Adama Traore under control on the right and gave the ball away on a number of occasions, handing Wolves an even greater advantage. He looked to have an issue with his vision after being caught in the face by Matt Doherty, with Neil Taylor marshalling the left-back spot well when he came on.

They were a few more nervy moments too, with Tyrone Mings hurt just after Aston Villa had made their final substitution in the 69th minute. Although Mings was able to continue, misfortune seems to be a theme for Dean Smith`s side in a season where they have not had the rub of the green.

Villa now have the international break to get Grealish, Heaton and Engels back to fitness and hope that players heading off to represent their countries do not pick up any other niggles.
Charlotte Marsh

Bruce grateful to his defenders again

Newcastle`s defenders were at it again on Saturday, with both DeAndre Yedlin and Ciaran Clark on target as Steve Bruce`s side came from behind to beat Bournemouth 2-1 at St James` Park and record successive league wins.

Incredibly, seven of Newcastle`s last nine Premier League goals have been scored by defenders, with centre-back Clark having now netted in consecutive games for the Magpies after his effort in their 3-2 victory at West Ham seven days earlier.

All of which is in stark contrast to Newcastle`s new-look strike force of Allan Saint-Maximin, Miguel Almiron and Joelinton, who have so far managed just the one goal between them so far this season.
Richard Morgan

VOTE: EFL Goals of the Month 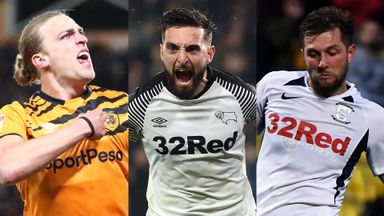 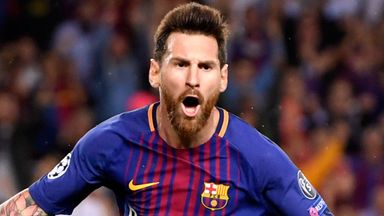 'Messi to stay at Barca for five more years'