Fantasy Team of the Week: Leicester trio continue to dominate

Sky Games look at who starred during Gameweek 14 of Sky Sports Fantasy Football. Did any of your team make this week`s best XI?

The Watford Stopper kept his third clean sheet in five matches as his side picked up their first Premier League win of the season at Carrow Road on Friday. Foster has brought in 41 of his 49 Fantasy Football points from his last five games, highlighted with the uplift in results that Watford have seen. Foster has reached tier two save bonus points in three of those five matches.

Ciaran Clark is showing the form of a striker, having scored in consecutive matches for Newcastle, securing two wins for Steve Bruce`s team in the process. Clark even attained tier one shot bonus points against Bournemouth and now boasts 19 points from his last two outings, rewarding the 0.18 per cent of Fantasy Football bosses who have overseen his upturn in form.

Caglar Soyuncu remains the bargain buy of the year, both for Leicester and in Fantasy Football. Soyuncu kept his third clean sheet in succession and has 36 points in that period, bragging 90 for the campaign thus far, putting him fourth in the charts. The rock at the back is earning 14.52 points per £M, topping the value-for-money list, and it is no surprise to see him as the highest-scoring defender in the game. It is his third consecutive appearance in the Fantasy Team of the Week.

Despite a lowly selection percentage of just 3.71 per cent, Fikayo Tomori continues to shine for Chelsea, earning another clean sheet in their win over Crystal Palace. Tomori has 27 points from his last four, earning passing bonus points in all of those matches, three in the shape of tier two (70+). Manchester City are up next for Chelsea, but following this comes home matches against West Ham and Aston Villa, another chance for Tomori to add clean sheet points.

Gerard Deulofeu is the Fantasy Player of the Week for Gameweek 14, stealing it off the hands of Christian Pulisic due to his inferior price tag. Deulofeu inspired Watford`s victory over Norwich, scoring the first and assisting the second for Andre Gray. He took home the man-of-the-match award and now has 22 points from his last two, with back-to-back goals in this time.

Richarlison posted his second double-figure haul of the season in Fantasy Football, in turn propelling him to the top of the midfield charts, level with John McGinn and ahead of Kevin de Bruyne on 73 points. Richarlison scored in Everton`s win at Southampton and now has three goals and three assists for the season. He was another who received the man-of-the-match award.

James Maddison ran the show for Leicester against Arsenal, grabbing his third man-of-the-match award of the year already. His long-range striker doubled Leicester`s lead and sealed the victory, while handing him an extra two points for his second shot on target in the match. The England international now has 69 Fantasy Football points and is hot on the heels of Richarlison and co.

Andreas Pereira attained just under a third of his seasonal points in Manchester United`s win against Brighton. His goal, albeit deflected, handed United the lead and sent them on their way to three valuable points. Over the course of the 90 minutes, Pereira managed to fire three shots on target, picking up tier two shot bonus points and earning him a place in the Fantasy Team of the Week over Liverpool`s Fabinho.

Christian Pulisic makes the Fantasy Team of the Week for the third time in succession, posting 51 points in this staggering spell, averaging 17 per match. Another goal helped Chelsea achieve a sixth consecutive Premier League win, making that his fifth goal in three games, while Pulisic was crowned the man-of-the-match once more.

Jamie Vardy netted his eighth goal in six games to top off a fine Leicester move and hand them the lead against Arsenal. He now has 11 goals this season and continues to lead the race for the Golden Boot. Vardy retains his second-place position in the Fantasy Football charts on 99 points, just six behind Tammy Abraham. With Brighton, Everton and Watford coming up, he could make that first spot his own, yet only 13.74 per cent of Fantasy Football managers are backing Vardy to continue his hot streak.

The man-of-the-match award went to Marcus Rashford after another double-figure haul and a third goal in four games for the Manchester United forward. It could have been more had he not skewed an open goal wide of the mark, but he posted another promising display nevertheless. Rashford has 34 points from his last four matches and moves on to 71 for the season.

Swarbrick: VAR is work in progress 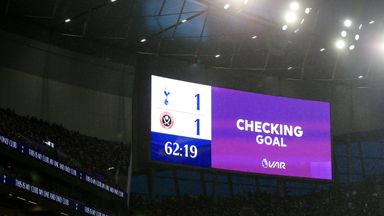 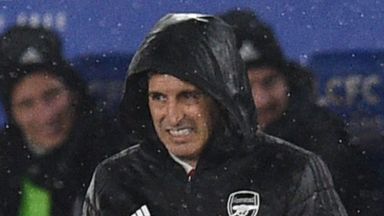