Arsenal caretaker Freddie Ljungberg says it is a great honour to lead the club following Unai Emery`s departure - but has played down talk of taking the job on a permanent basis.

Ljungberg, who was Emery`s assistant, was put in interim charge of the Gunners on Friday morning after the Spaniard was sacked in the aftermath of the club`s worst run of results since 1992.

Speaking exclusively to Sky Sports ahead of the Gunners` trip to Norwich on Super Sunday, Ljungberg, who won two Premier League titles and three FA Cups at Arsenal, said: It is a great, great honour, that is how I feel. I have this energy inside me and it is special.

I was proud, honoured that they trusted me to do it and deliver that, so I felt excited because I feel we have some very good football players here and it is a great club. I felt excitement at such a big thing.

The search for Emery`s full-time replacement has begun, with Max Allegri and Brendan Rodgers on the Gunners` shortlist, though it is understood the club will not rush an appointment, such is their faith in their former midfielder. 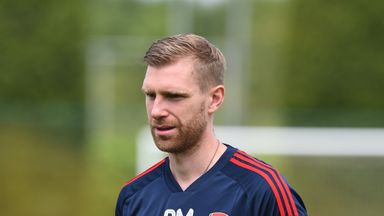 Mertesacker to support Ljungberg at Arsenal
Back to news list