With Watford changing manager for the second time in under three months, where has the planning gone wrong for the once-meticulous Hornets?

Watford have won few fans for their mostly-efficient, often-ruthless planning since their promotion to the Premier League in 2015, but that has not bothered them.

Keeping the Hornets in the top flight has come fairly easily for owner Gino Pozzo and chief executive Scott Duxbury due to years of careful preparation, but relegation is now a looming concern with the Hornets 20th in the Premier League after their 2-1 defeat at Southampton on Saturday, and the club searching for their third manager in 90 days.

So how have they fallen from a best-ever Premier League finish and an FA Cup final to rock bottom of the division in barely six months?

The wrong decisions at the wrong time

Quique Sanchez Flores was sacked at the end of Watford`s first season back in the Premier League despite a 13th-placed finish. There was uproar, but Pozzo had lost faith after four months of poor results. Eighteen months later Marco Silva was given the boot with Watford 10th. Another 18 months on, Watford had reached an FA Cup final.

In most of their calls, Watford have been vindicated as they champion a consistency which runs far deeper than any head coach. By the time one was shown the door, the planning was well underway to welcome in the next. But things have changed.

Perhaps, for the first time, sentiment has seeped its way into the process at Vicarage Road. On the surface, no-one would argue with the Premier League-best finish and an FA Cup final run delivered by Silva`s successor Javi Gracia in his first full season.

We`ve been searching, as every club is, for the right fit cause we see benefits of stability from the head coach side and hopefully with Javi we`ve now found that, said Duxbury in February this year, with Gracia`s name sung from the Rookery End every game, and all well on and off the pitch in Hertfordshire.

However, after thrashing Cardiff 5-1 in the same week as that interview, the Hornets went on to pick up just 10 points from their final 11 games; in any other season, Gracia may well have been shown the door for that downturn just as Sanchez Flores had three years before, but he was given a stay of execution.

The Hornets would certainly have had a strong case for changing manager, especially given their previous calculated decision making. He was not sacked, but he was not backed either - and four games into this season the board decided they had changed their minds and let Gracia go.

I don`t believe waiting and hoping for results to improve will work and that I need to make a change. It would be wrong of me to wait just because it looks better, said Duxbury after the return of Sanchez Flores, who had taken over from Gracia within hours of his sacking.

But it was exactly that summer of indecision, on the back of that fine FA Cup run, which had already cost the Hornets, coupled with an unusual lack of planning to find the next Gracia.

If the intention was to give Gracia a chance to prove himself, he never received it. If his departure was to improve Watford`s fortunes, their decision to bring back the same coach they had fired three years before looked odd.

A case for the defence

Duxbury did have a strong rationale behind returning to Sanchez Flores, though. Watford had conceded 18 goals in those final 11 games of 2018/19 and another eight in the first four of 2019/20, and needed solidity quick.

With Sanchez Flores at the helm in 2015/16, Watford had kept 11 clean sheets in the league - but there was to be no repeat performance this time around.

The tools at his disposal have not helped. Watford have broken their transfer record this season, but the £40m outlay on forward Ismaila Sarr did not do much to address the issue of an ageing and porous backline which conceded 59 goals in 2018/19, only 10 less than Cardiff City.

Within weeks of his return, Sanchez Flores had plucked Sebastian Prodl from obscurity to hand him his first league start in a year - a sign of how depleted the Hornets` defensive ranks had become, with no serious investment in 2019, bar the £5m arrival of Craig Dawson from West Brom.

Only Southampton have conceded more so far this season, leaving Watford in even bigger trouble considering goals have dried up at the other end too, and a goal difference of -19, the worst in the Premier League.

Sanchez Flores must take the main responsibility for Watford`s situation, though. Although painfully out of form for much of 2019, this is still largely the same squad which did break that positional record and reach that cup final. But instead of rejuvenating the dressing room, his return to Vicarage Road just continued its decline. 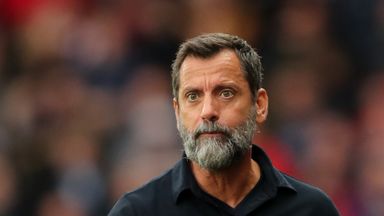 Contenders for the Watford job
Back to news list