Van Dijk, who inspired Liverpool to Champions League glory last season, is among the leading contenders to win the presitigious prize at Monday`s ceremony in Paris.

The Dutch defender will be challenged for the award by Barcelona forward Lionel Messi and Juventus striker Cristiano Ronaldo.

Messi is seeking his sixth Ballon d`Or, which would move him one clear of Ronaldo in the all-time rankings.

The Argentinian is the bookmakers` favourite to scoop the gong, while reports in Spain suggest he has come out on top in the voting procedure that closed last month.

But former Liverpool captain Gerrard thinks Van Dijk should be crowned the best player in world football at the event sponsored by France Football.

I`m Messi`s No.1 fan, for sure. I love the player,” the Rangers manager told William Hill. Obscene numbers in his game in terms of assists and goals.

But if you talk about consistency from one player over a year, who wins the European Cup and is absolutely faultless in every performance, that means you deserve to win the Ballon d`Or.

Messi won his 10th La Liga title in 2018/19, but was unable to go all the way in the Champions League with Barcelona.

The Blaugrana captain starred in a 3-0 victory over Liverpool in the first leg of the two clubs` semi-final clash, before the Reds secured passage to the final with a remarkable 4-0 triumph at Anfield in the second leg.

As well as lifting the Champions League trophy, Van Dijk helped Liverpool to their highest ever top-flight points tally, although the Merseyside outfit were still pipped to the Premier League title by Manchester City.

The Netherlands international is looking to become the first defender to win the Ballon d`Or since Fabio Cannavaro in 2006. 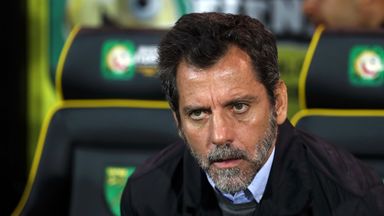 Contenders for the Watford job