Manchester City defender Aymeric Laporte expects to be back in action in the next two months.

The Frenchman is recovering following knee surgery after he was injured in City`s 4-0 win over Brighton at the end of August.

[My recovery] is going very well, he told The National. Still I need time but I hope as soon as possible I can come back and play with my team-mates.

I can`t say when exactly but more or less one month-and-a-half to two months.

Pep Guardiola`s side have fallen 11 points behind Liverpool in the title race since Laporte suffered his injury, including defeats to Norwich and Wolves, as well as a frustrating 2-2 draw at Newcastle on Saturday after they had twice taken the lead.

City were 10 points adrift of Liverpool last season before successfully chasing them down to win their third successive title and Laporte remains confident they can do so again, something Guardiola agrees with.

Yes, of course [City can win the title], Laporte added.

Last year was quite similar when [Liverpool] had a similar lead but we still have time this year to recover, to catch them and to again try to win the Premier League, so we hope we can do that.

We need to make sure we work a lot and don`t lose any more games.

Manchester City play Burnley at Turf Moor on Tuesday before taking on rivals Manchester United at the Etihad on Saturday - live on Sky Sports Premier League.

Mullins in charge of Watford vs Leicester 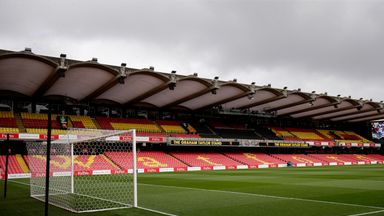 VOTE: Which Chelsea players should stay?

The Insider: Why Chelsea need another legend

The BMW driving Brentford towards glory

Race for the Premier League live on Sky

Havertz 'can leave Leverkusen this summer'

Gardner, Spooner to take charge of Birmingham vs Stoke