Jose Mourinho promised Tottenham supporters they would love Steven Bergwijn sooner or later following his arrival from PSV Eindhoven this week. As it turned out, the £27m Dutchman only needed one appearance to earn a place in their hearts.

Oleksandr Zinchenko`s red card was the turning point in what will be remembered as the first big win of the Mourinho era. But it was Bergwijn who made the crucial breakthrough, his opening goal arriving less than three minutes after Manchester City were reduced to 10 men.

It was a stunning strike. Bergwijn has arrived in England with a reputation for goalscoring and his striking instincts were razor sharp when Lucas Moura found him in space just inside the City box. Having chested the ball down, he slammed it into the corner before it had even hit the turf.

Spurs were fortunate to be level at that point, of course. They had not even had a shot on goal before Bergwijn put them in front. But Manchester City failed to make their dominance count and the punishment was brutal.

It said a lot about Mourinho`s first impressions of Bergwijn that he was willing to throw him straight into the team against such a formidable opponent. January signings often need time to find their feet. It must have been tempting to bed him in slowly. But lining up on the left, and with Christian Eriksen`s No 23 shirt on his back, Bergwijn never looked overawed.

He had the home supporters roaring in approval just five minutes in, when he dispossessed Kyle Walker on the halfway line and showed impressive strength to hold him off. Soon after that, he could be seen dropping back into the left-back position to help protect Japhet Tanganga.

The cramp which eventually forced Bergwijn off showed the difference in intensity between the Eredivisie and the Premier League, but Mourinho will be encouraged by his off-the-ball work. At the time of his substitution, he had made more sprints (12) than any other Spurs player.

That level of work-rate is imperative for a winger in a Mourinho team, and while he had few opportunities to express himself in an attacking sense before his goal, Bergwijn was always alive to the counter-attack and frequently drifted into the centre of the pitch, ending the game with more touches inside the City box (four) than any of his team-mates.

Independent of the goal, his performance was good, solid, mature, added Mourinho. We worked hard in the week with him to try as fast as possible to understand what we wanted from him, so it was a good performance against such a difficult opponent like Kyle Walker.

He was clever enough to create some problems. Also, defensively, very aware of his position, very good at covering spaces, and then of course the goal was great and so important for us.

Bergwijn`s instant impact was just one of many positives for Mourinho. The first three months of his tenure have not been without difficulties. Results have been mixed and the injury to Harry Kane came as a heavy blow to his plans. But following a busy January window, there is a growing sense his side is beginning to come together.

Giovani Lo Celso, whose loan move from Real Betis was made permanent earlier this week, produced another impressive performance in midfield and looks certain to play a central role in the club`s future.

The 23-year-old has stood out for his creative and technical strengths in recent weeks, but on this occasion his most important contributions came without the ball. Lo Celso recovered possession more times (10) than any other player on the pitch and there was praise from Mourinho for the way he contained Kevin De Bruyne and shut off Raheem Sterling`s runs inside.

There was even an eye-catching contribution from Tanguy Ndombele. The Frenchman has been a peripheral figure under Mourinho, who was critical of his injury record after the 1-0 loss to Southampton on New Year`s Day, but has the harsh treatment sparked a response?

It certainly looks that way. Ndombele was excellent after replacing Dele Alli at the Tottenham Hotspur Stadium, producing the turn and threaded pass which set up Heung-Min Son`s second goal barely a minute after stepping off the bench. After that, his attacking intent helped Spurs keep City on the back foot in the closing stages of the game.

At the other end of the pitch, and in the week Spurs allowed Danny Rose to join Newcastle, Tanganga - a player brought into the side by Mourinho - produced another assured display. The academy product could hardly have had a trickier opponent than Riyad Mahrez, but while there were some difficult moments, he rose to the challenge impressively.

It`s little wonder Mourinho was smiling from ear to ear as the clock ticked towards the final whistle. This was an improbable victory. There were times when it looked downright impossible. But thanks in part to Bergwijn`s bolt from the blue, Spurs can finally see a brighter future.

Is this Guardiola's biggest ever challenge? 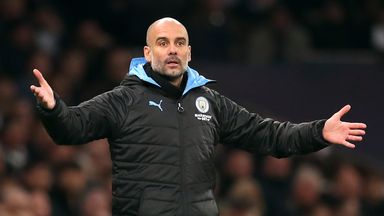 Abraham reassures Lampard he can fire Chelsea into Champions League