Albion looked like they were going to make it four straight wins and move nine points clear, at least for two-and-a-half hours until Cash’s equaliser in the first minute of time added on – their only shot on target.

The Baggies felt they should have won the game with almost the last kick when a Callum Robinson strike was ruled out.

On-loan Sheffield United forward Robinson’s first goal for West Brom put them ahead in the 36th minute and a 65th-minute own goal from Tobias Figueiredo made it 2-1 after Kyle Bartley had put through his own net to level on the stroke of half-time.

Forest wasted an excellent chance to take the lead when the unmarked Lewis Grabban headed a foot wide from Yuri Ribeiro’s cross.

Albion struggled to establish any dominance as the first half became very niggly, with West Brom’s Matheus Pereira and Forest left-back Ribeiro needing treatment after tackles.

Robinson screwed a shot wide from 12 yards from Jake Livermore’s cross and Dara O’Shea’s header was blocked by Cash from Filip Krovinovic’s centre as Albion sought a breakthrough.

Pereira was finding himself on the end of some rough treatment and Cash was booked for a cynical foul from behind on the Brazilian playmaker.

West Brom took the lead as Pereira got his own back. The on-loan Sporting forward robbed Samba Sow in midfield before finding Robinson, who curled home in style to the left of goalkeeper Brice Samba.

Forest belatedly returned to the attack just before the break. Tiago Silva volleyed fractionally over the crossbar from Cash’s cross before Forest equalised.

Sammy Ameobi, who had switched wings, crossed from the left and Bartley, stretching to keep the ball away from Grabban at his right shoulder, only succeeded in diverting the ball into his own net.

As the half-time whistle sounded, Albion head coach Slaven Bilic protested to the fourth official after strong tackles from both teams.

Albion went close just after the restart when Krovinovic tried to pick out the bottom corner from 20 yards and Samba scrambled the ball behind.

The home side were suddenly finding space to attack, with midfielder Livermore having an increasing influence.

The former England international screwed a shot on the turn straight at Samba, but Albion were just getting into their stride again.

A full-blooded volley from Pereira was blocked by Ameobi just in front of the line before the hosts regained the lead with the second own goal of the afternoon.

Livermore was involved again as his cross was tapped into his own net by Figueiredo.

But Forest were disappointed play was not halted earlier in the move when Livermore caught Ameobi as he turned to leave him writhing on the ground.

Robinson curled over then had an effort tipped wide, sandwiching Romaine Sawyers’ shot that was palmed aside.

But Cash punished them when he struck an unstoppable angled shot into the top corner, giving goalkeeper Sam Johnstone no chance.

Albion were denied a winner with virtually the last kick when Robinson’s volley flew in but Bartley, lying on the ground over the line, was ruled offside. 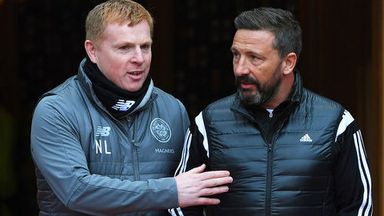 Lennon: McInnes one of Dons' best bosses
Back to news list

Premier League divided on what happens next